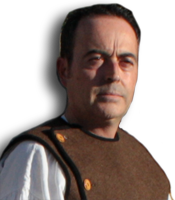 Born in A Coruña en el 1967, begin his folklore relationship with him in it in 1975 as part of the grouping of children “GAITEIRIÑOS” in the neighborhood of La Gaiteira City.

With this grouping children receive training in dance (Estrella Vieites Furelos), traditional music (harmonica), chorus (José Vázquez ) and theater (Redondo Jose Santos), recibiendo several first prizes in the dance competitions, a national theater prize children in Madrid, with the work “The king, the dictator and the birds” and participating in zarzuelas and largometrajes in Galician.

In it in 1983, is part of the Association of Choirs and Dances of Sao Paulo in the following su director in charge of training Estrella Vieites. With this association participates in national and international festivals among consiguiendo Other, as a member of the group “the piolet gold” en el Festival Internacional de las mountainous regions in Zakopane (Poland) and it’s special prize Jurado en el Festival Internacional de Kaunas in Lithuania .

Since he himself in 1983, comienza su labor as a master of traditional dance, impartiendo training in various groups and associations:

* Association “Pasino the Pasino” of Betanzos.

* Cultural and Recreational Association of Coristanco.

* School of Dance and Dance Association of Choirs of St. Paul.

Working as a mentor of dance in the Galician Centers in Switzerland in Basel and Geneva, hired by the Secretariat of Culture of the Xunta de Galicia, for he apoyo de la culture of Portuguese communities outside it.

All this work, read lleva a coger the artistic direction of the Association of Choirs and Dances of Sao Paulo en el 1997 years after he recog testigo the previous director, and part of the board and the organization responsible trabajar the International Folklore Festival “City of Corunna. In this step, fue member in voice quality, the board of directors of the Federation of Choirs Y Dances of Spain (FACYDE).

It is worth mentioning participation in various su trabajos edited and written to the wide artistic su Trayectoria:

* Expertise in he program “dabadaba” Torrebruno of representing the book “The king, the dictator and the birds” in Spanish Television in Madrid.

* Zarzuela in Globe “The dam and the river.”

the “Villancicos and Aguinaldo.”

In the present runs the folk and cultural grouping “Dew” as Pontedeume, haciéndose over the artistic direction of the dance group as well as the Escuelas Child and Youth Association and a member of the Directive Board vowel, playing the role he coordinator of music and dance.