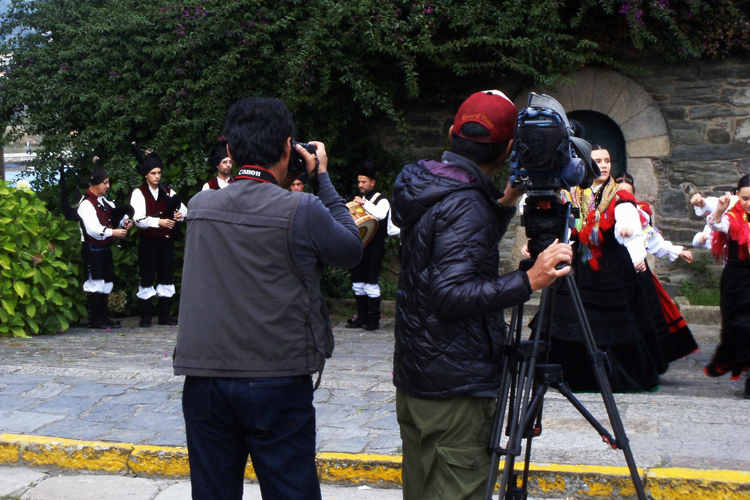 Last week, the Japanese broadcaster Wow Wow made contact with our association, in order to record the dance more typical of our land “the Muiñeira” for his TV show “Railway Story”, in which This shows pictures of train travel throughout the Spanish territory.

The recording was made, on Friday October 26, at the Tower of Andrade, where thanks to the collaboration of Excmo.Ayuntamiento Pontedeume, the television crew was able to make the recording from the top of the tower including shots taken.

The dance group, accompanied by a quintet of bagpipers, danced the “Muiñeira Montañesa” repeatedly, to give play to the cameras not lose detail, or dance steps, or of music and instruments.

After recording, the Councillor for Culture Ms Ascension Olarte and Vicente Pontedeume Mayor, D. Gabriel Torrente Piñeiro, the whole team received television thanks to its presence in the town.

Since we want to thank our association Sr.Terumi Moriya, Japanese television coordinator, for telling us for this program and the City of Pontedeume, for his willingness and help whenever they ask to be named after Orballo and Pontedeume beyond where we’re going.

This entry was posted in General. Bookmark the permalink.